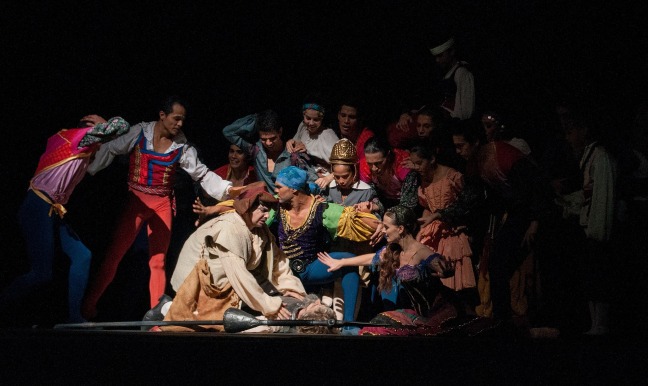 This post is the second in a series of five articles describing a major arts-based leadership development programme at Oxford University’s Saïd Business School, designed and run over a four-year period by Dr Mark Powell.

In the program, which was conducted on behalf of a major oil and gas exploration company, senior project managers worked closely with a wide variety of artists: jazz musicians, actors, painters, storytellers, dancers, conductors and others. The aim was to create a new culture of ‘open mindedness’ in the project managers, encouraging them to interact effectively with the other stakeholders involved in major projects, and enhancing their ability to ‘improvise’ – to react quickly and effectively to changing circumstances.

This article focusses on the use of drama-based concepts and techniques. The drama-based sessions were facilitated by Piers Ibbotson, an ex-Royal Shakespeare Company actor and associate director, now principal teaching fellow at the UK’s Warwick Business School.

The sessions explored a very wide range of drama-based concepts and experiences. This article has space to focus only on two areas: the creation of ensembles and the techniques of creative rehearsal. Delegates took part in a number of exercises to illustrate these concepts, some of which are used in theatre to help bring new groups of actors together when building new ensembles.

The focus throughout the program was on having delegates work very closely with artists, hoping to create a series of ‘ah-ha!’ moments where delegates would grasp at a physical, ‘gut’ level what the artists were experiencing and what they were trying to achieve.

Building real ensembles takes time; you cannot throw a group of people together and expect them instantly to become an ensemble. Theatre groups, however, build hugely effective ensembles remarkably quickly – there is typically a matter of weeks of rehearsal time before a new show is performed for the first time in front of an audience. The key is the actors’ mindset of trust and openness: they set out with the explicit goal of coming together as ensemble to put on a great collective performance.

Delegates experienced a series of exercises designed to explore the ideas of status and trust in groups and the fact that it is possible to trust someone completely in the ensemble environment without it being necessary to feel that you ‘trust them with your life’.

The process of creative rehearsal is a key part of creating an ensemble. In theatre, a director will be ‘in charge’ of rehearsals but not ‘in control.’ Being ‘in control’ stifles creativity; directors offer ‘creative constraints’ and suggest new avenues to explore. New ideas are accepted and worked with by the ensemble before they are dropped or accepted by common consent. This is contrasted with the practice, common in business, of examining every new idea for its faults and rejecting anything that does not seem to be perfect. There is an acceptance in theatre that every idea when first put forward is ‘half baked’ and that it is the function of rehearsal to try to bake the idea fully.

Delegates took part in an improvisation exercise based on the concept of ‘yes, and…’ – taking an idea put out by one member of the ensemble, embellishing it and offering the new version back, trying not to ‘block’ the developing idea by closing down the possibility of further embellishment. Other exercises explored ‘creative leadership’ by carrying out some simple task as a group – firstly using planning and implementation and then as part of a dramatic scenario, creating the possibility for improvisation and creative leadership. When we plan and implement, any change requires that we stop, re-plan and then try to re-implement; when we work creatively together – like actors or musicians performing – we respond instantly to the changing scenario.

Another key aspect of theatrical rehearsal is that the whole cast must come together for a full rehearsal before the first performance – leading actors, supporting roles and extras. Delegates on the programme considered the extent to which business properly ‘rehearses’ scenarios creatively and whether all of the relevant players are ever brought together, or only the ‘leading actors’.

A key aspect of arts-based leadership development is that individual delegates respond differently to different sessions: a particular aspect will resonate strongly with one delegate; for another it will be something else. However, the typical take-outs from drama-based sessions on ensemble work and rehearsal were these:

Lessons from the performing arts

Over the course of the four-year programme, some 200 project managers attended the week-long residential course at Oxford and a real shift towards a more ‘open-minded’ culture was reported by the company.

If businesses behaved more like artistic ensembles, business culture could be transformed.

Read the following article in this series: ‘Jazz Leadership’

A semi-fictionalised account of Dr Powell’s ground-breaking arts-based leadership programme is given in the business novel Perform To Win: Unlocking the secrets of the arts for personal and business success, by Dr Mark Powell and Jonathan Gifford

A full analysis of the dance aspect of the programme was published in the Journal of Organizational Aesthetics under the title, ‘Dancing Lessons for Leaders: Experiencing the Artistic Mindset’

Below: Top dancers Gunnar Gunnarsson and Marika Doshoris perform at a Performance Thinking workshop before joining delegates for an interactive session on delivering winning performances.

The Director as Innovator

Use the audio payer below to listen to LID Radio interviews with Mark and Jonathan about what business can learn from the performing arts (“Perform To Win”) and Machiavellian intelligence in the workplace.

To contact Dr Mark Powell and Jonathan Gifford and for any enquiry you may have, please do . . .